Medway YC has one of the largest active fleet of Wayfarers anywhere in the World with up to a dozen boats racing each weekend, and includes teams who are new to sailing and to racing as well as some sailors who compete at the top end of the national racing circuit. Because of the size of our fleet, we race as a one design class although there is a personal handicap series which runs in parallel with the scratch series and is usually won by the most improved team over the season.

Racing takes place on the tidal River Medway with races usually taking 90-120 minutes to complete. These take in the twists and turns of the river and the challenges of changing tidal and wind conditions. Most racing is around the navigation and specially laid permanent race marks on the river from the Club start line with the woods behind, but the club also organises windward/leeward race days (with three or four short races in an afternoon) on five or six Saturdays each year. 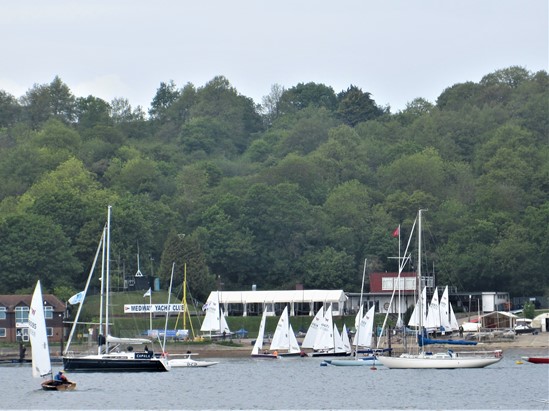 The 15ft 10in Wayfarer dinghy was designed by the late Ian Proctor in 1957 and since then has acquired an unrivalled reputation as one of the great all-purpose sailing dinghies in many countries around the World with over 11300 built. For many years, the Wayfarer was the staple training dinghy used by sailing schools. It is cruised extensively, from gentle day sailing and picnic trips to legendary voyages to Iceland, across the Bay of Biscay and non-stop around Britain. The boat is also raced at many sailing clubs. The Wayfarer boasts a good performance across a range of conditions and is raced enthusiastically by beginners (who appreciate the boat’s forgiving characteristics) to Olympians (who like the close and competitive racing on the water and the camaraderie off it) and everybody in between.

The Wayfarer hull has remained unchanged since it was designed but in 2005, the deck and internal layout was re-designed by Phil Morrison to create a more modern and ergonomic boat. One of the features of the design is that crews weighing from 22-30 stone can be competitive in a range of conditions. Older boats can compete on equal terms with the newer boats. The boat has a mainsail, genoa and large spinnaker to boost down wind performance. It is normally raced by a crew of two. The Wayfarer currently has a Portsmouth number of 1102 (2020).

The class also has a strong Class Association which organises cruising events and a full racing circuit including Regional, National and International Championships at home and abroad. 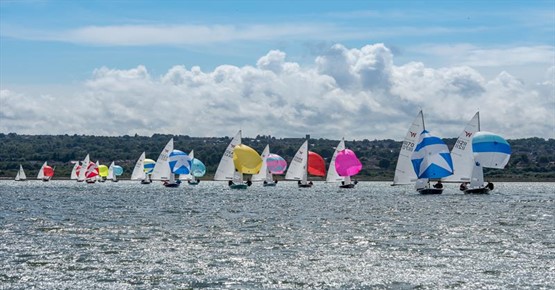 Training is important and we usually try and arrange for class legend and sailmaker, Michael McNamara, to visit us and provide a day of training on and off the water from which we all benefit. The top sailors in our fleet are always happy to help the less experienced by offering advice and help.

We are a social class too with everybody gathering on the Club patio after racing for tea, cake or something stronger, to chew over the day’s sailing. We have an end of season dinner plus several other social events each year.

Most years the Medway YC hosts a Wayfarer open meeting where visitors travel to our Club to race for the weekend. In 2012, 2016 and 2021 we hosted the UK National Wayfarer Championships.