The Montgomery Challenge Cruise but its not a race.

On the Saturday the 9th of July early in the morning ,1000hrs to be precise.( It was early if you had been moored up on the pontoon the night before ) like smugglers of old times 23 boats slipped their moorings and stealthily glided down the river . Not because they were quiet but because there was very little wind .

A few boats sneaked out of the Chatham Marina ( one was using a Pogo ) and sailed past the by now spread out fleet . 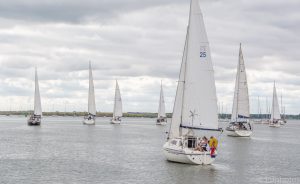 All went very well till the front of the fleet turned left at the Montgomery and the wind died and so of they jolly well went to the Netherlands . Once again the Power of the class captains came into play and just as Muskrat with 3 reefs in got to the wreck the wind picked up and once again Muskrat and Mischief were in the Pack . By now the competition was hotting up , not because it was a race (its not a race ) but 13 of the boats had booked Dinner in the Queen Phillipa and were thirsty. We said goodbye to the boats who were not joining us in the usual manner on channel 72 “Good Bye and you’re going to be missing a good night in Queenborourgh “ Little did some of us know quite how much of a good night it was going to be . It was the cider Festival. 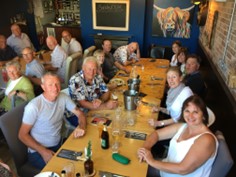 The rest as they say was history .

It’s not about winning its about the having fun