A little later than expected. Here is our report on Commodores day.

Despite gloomy forecasts of no to little wind plus rain, the sun was out with a 5 – 10 kn Southerly . Morning racing focused on fun but tactically speaking it was challenging with a no go zone in the lee of St Mary’s island. However a strong flooding tide tempted the unwary and often determined finishing order.

First off were the dragons in the highly contested Myrtle Turtle Tureen Dragon’s crews race. Despite prematch chest beating the race was won by the fairer sex, Sarah Burgess on Whistle. Gigi Studart helmed her dads Squib to victory and keeping to a theme Ella Mckenzie triumphed among her Wayfarer novices. In the Wayfarer Crew’s race, strongly contested, Pete Dilley destroyed the opposition.

The Cruiser Class made a fantastic spectacle with an impressive display of hoisted flags, and of course copious glasses of wine to all who visited the pontoon.
For the serious racers the “Lemon Trophy and Magula Trophy” were scheduled for a 1400hrs start, this is an all-comers’ handicap race with a mass start sailed in “Heartbreak Reach”, all within sight of MYC. The wind direction was a southerly flicking to the south east and south west largely due to the properties on St Mary’s Island, this was the Race Officers nightmare but a course was duly set, this was 31, 30A, 32 all to starboard and 4 times round. Boats left their moorings and those on shore launched and if by magic the wind swung into the East and a steady force 3 to provide a perfect windward start to the first mark. In the excitement to get started several boats were premature and then faced a return back with a battle up the beat from behind.
The run from 30a back to 32 against an increasing ebb tide left a big decision, north or south bank, it soon became very apparent that the south side was the way to go! A narrow run with boats converging on buoy 32 was going to be trouble add in spinnaker dropping with port and starboard clashes, it paid to run wide and stay out of trouble!
This was the end of round one with a further three to go and positions did not change radically, and all was set to be a very close finish which was borne out in the results with only seconds separating boats on corrected time.

Finally I would like to thank everybody involved for making this event a brilliant day.

You can also find the Dragon Race Report on our website.

Bright sunshine and a gentle breeze from the SE, perfect weather for the Wayfarer’s.  Anyway, we had a crews race in the morning just for the Dragons with James Staniland helming Molly, Ivor Allcock helming Suti and Sarah Burgess helming Whistle (big shoes to fill Sarah, especially as my size 12’s looked tiny compared to Quentin’s size14’s!!!). Click here for the full report….. 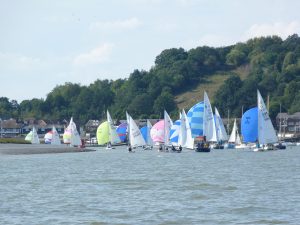 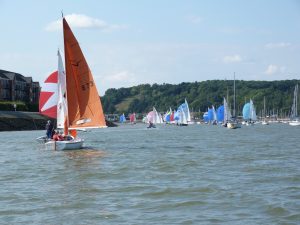