Mike Spurgin joined the MYC in 1962 and sailed a series of cruisers; Blue Glass (Spurn), Galloping Ghost (Listang), Galloping Knight (Westerly GK24) and Gordian Knot (Westerly GK29). He achieved considerable success in club events, not only due to him being the author of the Medway Rating System in use at that time, but also to his considerable skills. He also achieved fourth place overall and first in the inboard engine class in the GK24 Nationals.

Mike’s generosity led him to enter heavily subsidised sailing partnerships with younger members which helped launch them on their sailing careers. The first was with Graham Goodhew, who later sailed a Sonata and became Commodore in 2001 and afterwards myself, who sailed with him for many years until his retirement from racing.

Once he had retired in 1991, he took up marine photography from his series of RIBs. There is a large archive of his shots taken during several Medway Regattas and other events.

Mike’s vision, drive, persuasive powers and tenacity led to the construction of the original scrubbing trolley, affectionally known as ‘Lady Di’ because it was commissioned on the day of the Royal Wedding of Charles and Diana, and the design and building of the original jetty. He was a great supporter of the RNLI and life member of the MYC.

His greatly-missed wife Hillary sadly died several years ago after which he lived his final years in the village and was often seen walking to the club for lunch at the weekend.

He is succeeded by four daughters and several grand- and great-grand- children.

In his passing, the club says good-bye to someone who helped it make great strides forward yet never sought public recognition for his work. He had a very generous and unassuming spirit. He will be sorely missed by everyone. 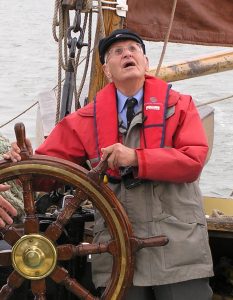