The Musto Skiff southern series made a stopover at Medway YC over the weekend of 1st /2nd October. Forecasters were painting a bit of a bleak picture of dogs off chains on Saturday followed by torrential rain on Sunday with little wind, which curtailed the number of visitors. Only the foolhardy and the northerners (who thought this was like mid-summer) were up for the challenge.

With a solid 20kts+ blowing down river and the entertainment of a wind over tide situation, which gives ramps like those seen on the front of the Royal Navy’s aircraft carriers, this was going to be a test of boat handling for the brave bunch making their way to the course in Long Reach (Long being particularly appropriate as it’s 3 miles downstream of the club).

However, in that breeze it didn’t take long for those with sticks in the sky to make.

What we arrived to was somewhere close to Garda at 8am, ok, maybe not that pretty, but sharp waves with teeth meaning that although the windward mark was nicely sheltered in flat-ish water (nice work R.O. Tim Townsend) the leeward mark was another story…

Race 1 got under way with a handful of the fleet underestimating the tide and recalled, leaving the fleet to head left into the channel. Eddie Bridle showed his pace rounding first, followed closely by Rob Richardson, then Ben Clegg (a strong comeback from his recall at the start!). Clegg went for the early gybe inshore and took the lead, leaving Bridle and Richardson battling it out for the second place.

Clegg marched on and took the victory, with the close battle on the final lap won by Richardson in second and Bridle third (the fleet behind deciding to attend a swimming gala on more occasions than they may admit!).

Race 2 got off to a clean start. This time, Dave Poston (going like a steam train) lead around the windward, with Bill Maughan and Ben Clegg in pursuit. The downwind proved tricky, Poston and Maughan both capsizing towards the leeward mark in some gnarly chop, leaving the door open for Clegg to take the lead and Bridle close behind. The final downwind was closely fought between Clegg, Bridle and Graeme Oliver.

The final dash to the finish saw Clegg go for a swim, but a navigational error from Bridle and an overlay from Oliver let Clegg get back upright and take his second bullet, Oliver 2nd and Bridle 3rd.

Between race 2 and 3, the breeze blew with a little extra menace. Some sailors thought better of it and returned home, leaving a handful edging up the beat, rigs bouncing around and with the thought of a potential abandonment. Thankfully, race officer Tim looked to the future and saw it easing slightly, which materialised after a short wait and race 3 got under way with a more manageable 15-20knots.

Ben Clegg was hot out of the blocks again, leading the fleet left and onward to the windward mark, with Bill Maughan and Eddie Bridle in hot pursuit. At the end of the first downhill, Bridle had well and truly ‘sent it’, right on Ben’s heels at the rounding and with a short lead from Maughan. The front three kept it close on the second beat, Clegg holding on to a narrow lead from Bridle and headed back downwind.

By the bottom, Clegg made some extensions and sailed on to the upwind finish, taking the clean sweep for the day, followed by Maughan who managed to sneak ahead of Bridle downwind and hold on to the finish. 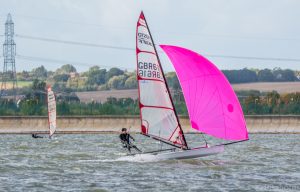 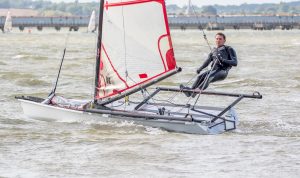 Fortunately, the aforementioned biblical rain didn’t materialise on Sunday morning, so there was a promise that the weary, slightly broken sailors may get a good sail. Unfortunately, with the lack of rain, came a lack of wind, so the sensible decision was made to can the race and let everyone get on their way back home to nurse their bruised bodies and in some cases egos.

Typically, by mid-afternoon the sun was shining and 12kts breeze was blowing, sometimes you just can’t win!

Thanks to all of the team at MYC for the organisation and hospitality. We now look forward to the remaining Musto Skiff circuit events of the year – Itchenor YC for the Firecracker in the south and Dalgety Bay in the North to close out an excellent year of Musto Skiff racing!