Medway Regatta was reduced from the usual 3 day event to just 2 in order to avoid a clash with the planned River Pageant to celebrate Her Majesty the Queen’s Platinum Jubilee. Run on the Thursday and Friday of the long Bank Holiday weekend up to eight races were crammed in for the Dragons but other classes having fewer longer races. The event also incorporated the Sonata Eastern Championships.

Day 1, Thursday 2nd June dawned with very light winds and the committee boat left the club Pontoon to travel down river in search of wind. A light Easterly was found half way down Long Reach and a course was laid for the Dragons and Sonatas to race over a windward – leeward course and longer courses created using channel marks for the cruisers.

After a short postponement the three Cruiser classes started in a very fickle Easterly breeze and a foul tide, making for very slow progress down river. The course for each cruiser class was similar with a beat down river to South Kent Buoy at the eastern end of Saltpan Reach with the white sails only cruising class simply returning from there with the tide upriver to MYA1 before beating back downriver to a finish at buoy 19. The faster racing classes had a number of windward leeward loops in saltpan between South Kent and Number 12. Class 1 performing this loop three times and class 2 twice.

First boat to finish was the Beneteau 33.7 Toucan sailing in class 3 after nearly 3 hours racing in a building sea breeze. The first boat to finish in class 1 was the Club Swan 42, Mercury, which completed the longer course in just over 3.5 hours, while the Dehler 34, Zephros was the first boat home in class 2, finishing just ten minutes behind the larger Mercury. Of these only Zephros managed to save their time on handicap with the winners in class 1 being the X-99, Reefer X, and class 3 was won by the Folkboat, Tatterat.

After spending so long short tacking against a foul tide four of the boats in each of the cruising classes decided enough was enough and missed the second race of the day. Much depleted fleets came to the start of the second race of the day. Due to the long time between the front and back of the cruising fleets finishing the first race the starting sequence was different to normal with starts slotted in between the Dragon and Sonata races and class 3 starting before class 2. Skippers had to listen carefully to the radio announcements. The same course was used for all classes with a shorter foul tide beat downriver to buoy 12 followed by a long run up the river to the eastern end of Gillingham Reach and turning back downriver at buoys 24 and 25 before finishing at buoy 19 again. 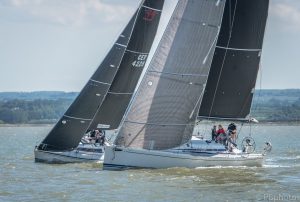 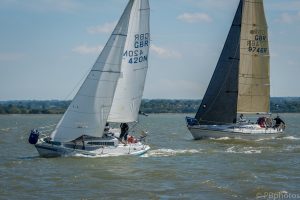 In class 1 Reefer X won again on corrected time while in class 2 Zephros again topped the listings but in class 3 the winner was the Bavaria 34, Freya

In the one designs the Dragons spent the day having four windward- leeward races, each of about 1 hour duration. The Sonatas opted for two windward leeward races followed by a round the cans race using the same course as the second Cruiser race.

With a strong flood tide running in the main channel the races tended to be one sided with the left hand side of the course being favoured both up and down wind.

In the Dragons the visiting boat “Hands Off” had a healthy lead at the end of the day with three bullets and a second place. In second place was “Suti” from the home club who won the other race. The crew on Suti deserve a special mention as they sailed the whole regatta two up. As ever in this class the racing was close with only a few seconds separating the boats at the finish of every race and any mistake could easily relegate the boat to last place.

On paper the Sonata Racing at the end of day 1 looked to be a one horse race with “White Noise” winning all three races from “BD2” and “Screwloose”. This belies the fact that the three boats were separated by inches at each start and only a few seconds at the finish of each race. The rest of the fleet were not far behind and everyone had a chance to do well.

Day 2 brought a stronger steady breeze and with one race scheduled for the three cruiser classes they were all sent out into the Thames Estuary for triangular courses of various sizes around the infamous wreck of the SS Richard Montgomery to try and get all three classes to finish at about the same time. The boats generally took between 5 and 6 hours to complete the course.  Class 3 was boosted in numbers by extra boats as this race was being sailed for the “Medway Challenge” trophy.

Both the One Design classes were scheduled for 4 windward leeward races.

All three classes had the same first leg out to buoy 4A in the Medway Approach Channel meaning another long foul tide beat. Class 1 then reached out into The middle of the Estuary to have a run between Sea reach 2 and 4 before crossing over the Nore Sand and coming back up the Medway to finish by buoy 19. Class 2 had a similar course but were able to miss out Sea Reach 4. Class 3 were kept t the south of the estuary and went straight from 4A to Nore Swatch, taking them just to the north of the Montgomery for a last look at the masts before they are removed later this month.

Class 1 and 2 were won on corrected time by “Reefer X” and “Zephros”, meaning a clean sweep for both boats. Having missed the second race on Thursday, “Tattarat” returned on Friday to win class 3 and take the Medway Challenge trophy. The overall winner in Class 3 was the ever consistent Beneteau first 235, “Amberjack”, but in a no discard series it shows the difference it makes to miss a race out. 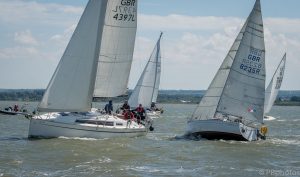 The family trophy was awarded to the Leeming Family who finished third in class 3 with two young children on board, showing the spirit of the cruising class. 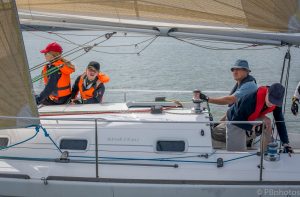 Racing in the Dragons was less one sided with the first two races going to “Taniwha” from the home club who missed the first day’s racing due to other commitments. “Hands Off” returned to form, winning the third race of the day while the ever popular “Gandalf” won the final race of the regatta.

In the end it was a convincing win by “Hands Off” from “Suti” and “OCD”. 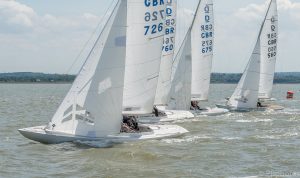 On the other hand racing in the Sonatas was “more of the same” with “White Noise” winning the first three races before slipping to 4th on the final race allowing “BD2” to take the final bullet.

“White Noise” won the regatta by a large points margin without ever being far in front of the fleet. They were just consistently that little bit better, which is all you need in a one design fleet.

The trophy for the most improved performance during the regatta was awarded to Edwin Hannant who managed to run aground on the way to the start of the first race and was 5 minutes late fr the start but improved to win the last race. It was his birthday too.