Gandalf, Whistle, Suti, Tempest and Molly were out in a breezy F4 gusting F5, from the East.

I am told all were slightly behind the line at the start but I did not see, as Whistle went aground with just a few seconds to go before the start, on the South side.  Q gallantly leapt overboard and pushed us off so we were rather distracted at the beginning!

Edwin, James and Howard on Gandalf were first to the first mark and held that position to lead the whole race.

After our ‘slow’ start, Whistle gradually caught up behind Suti, two up with just Ivor and Toby, behind Gandalf. 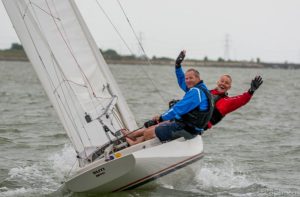 Tempest’s spinnaker halyard snapped on the first run which meant they then, and Molly, white sailed the race as the wind strength increased.

Whistle caught Suti just before the forts and this became the order, until the finish.

It was a fabulous race: rather breezy and sincere congratulations to Edwin, James and Howard on their well-deserved win.  😊 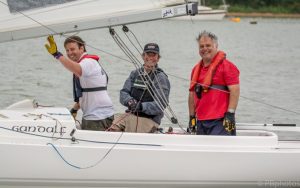 Above: It was warm, wet, windy and we won.

On our return to the Club we were greeted by some Grandees of the Class: Lizzie and John Shilling and Robin Ridsell-Smith who joined us for the celebrations: the Champagne was greatly enjoyed by all; with many thanks to Edwin and Howard.

Note; since the beginning of the this season all the above dragons and Taniwah have had a 1st result.

Our thanks go to Sarah Burgess on Whistle with Q and Wendy, for this report