A total entry over the 3 days of 35 was fewer than we have achieved in the past but more than we dared to hope for under the current COVID restrictions. The largest class by some way was the “White Sails” cruiser class with 11 boats coming to the line for the River Challenge race on Sunday.

for a full program of decent length races for all classes. Saturday and Sunday could only be described a “chilly” if you were out in the breeze but, unusually for the UK, Bank Holiday Monday was the hottest day of the year so far and with a decent breeze allowed for some “Champagne Sailing” to close the event

Racing was separated into 6 classes with Cruisers divided into 3 with Class 1 for boats racing under IRC ratings and classes 2 & 3 for boats using the RYA NHC handicap system but with class 3 being for boats without spinnakers, “White Sails only”. The numbers in Class 2 (NHC with spinnakers) were boosted by the Sonata fleet who joined them on the water  but with their results separated. In the other one design classes, the Dragons had two days of intense windward – leeward racing while the Squibs raced shorter round the cans races form the Yacht Club Line.

In IRC class 1 racing was close on corrected time showing that IRC does handle very different boats well, allowing them to race together. After 3 races 3 boats were in contention to win the no discard series so it was all to play for in the last race. “Mercury” (Club Swan 42) with 2 1st places and a 3rd was one point clear of the ever consistent “Hellaby” (Davidson Quarter Tonner) with 3 2nd places with “Reefer X” (X-99) with 1st, 3rd & 4th a couple of points further back

. It would not be Medway Regatta without someone finding the mud and on the final corner in the river before the finish of the last race our Vice Commodore duly obliged planting Mercury’s Keel firmly in the ooze. As one of the crew said on the radio announcing their retirement from the race “Our skipper has forgotten where the shallows are in the river”. This retirement from the no discard series dropped Mercury to third place with Hellaby winning class one for the fourth time in a row from Reefer X.

NHC With Spinnakers and Sonatas

Entries in this class were boosted by the late decision of the Sonata Class to race with them and on handicap the smallest boats filled the top places but once they were removed from the equation the winners laurels went to Rush (Sigma 35) visiting from the Royal Cinque Ports Yacht Club in Dover from Surfuit (Hunter 707) who could not live with the bigger boat up wind. 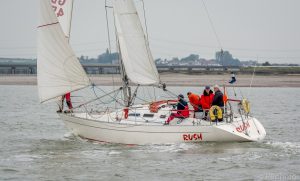 The Sonatas were breaking new ground by racing with the cruisers and sailing much longer courses than usual during their Saturday afternoon club racing. Each race took them down to the mouth of the Medway and the long distance race on the Sunday took them out into the Thames Estuary and past the wreck of the SS Richard Montgomery. “BD2” sailed by Alistair Bolton coped best with the new challenges and wone the series overall from “Bluetack” and the ever improving “Quiet Air” who also was awarded the “Boatshed Trophy” for the most improved boat during the regatta.

This class aimed at the infrequent racer was the most popular class by some distance showing that there is demand for this more relaxed style of racing. “Eleison” (Feeling 32DK) won the first three races proving there is no substitute for sailing consistently well and it took until the final race before the NHC handicap adjustments managed to make “Eleison” slip all the way to 2nd. The final race was won by “Freya” (Bavaria 34). Sundays race was sailed for the “Medway Challenge” trophy and entries were boosted by a number of boats who only wanted to do one race and could not commit to the whole regatta. “Eleison” triumphed again from “Ariel” (Parker 27) and Ellida (Swan 38), both of whom only did this race.

The family trophy was also presented to a boat from the white sails class. This went to the Bailey family sailing their First 235 “Amberjack”. The whole family, including two very small boys had a great time sailing some long races with

the broadest smiles seen on any boat.

As ever the Dragon class produced some of the closest racing of all  the classes with 4 different race winners all of whom also finished last at least once. Over the first two days they had four windward leeward races per day and on the final day’s longer race the first three boats were a;ll overlapped at the finish after more than 3 hours racing. Visiting boat “Hands Off” from the Royal Corinthian Yacht Club in Burnham had a bad first day but worked out the vagaries of the River Medway for the Sunday and Monday scoring a series of bullets to take the overall win from “Taniwha” by beating them to first place ion the last race by less than the length of the foredeck. By being consistent “Gandalf” managed to take 3rd place. The Squib class opted for a more relaxed Regatta being run from the Club line with two races per day with a lunch break in between showing that racing can be civilised. The series was won easily by “Avocet” with 5 straight wins from “Winsome” and “Black Mark”

Medway Yacht Club would like to thank the sponsors who have supported this event even though they have been severely affected by the COVID pandemic. We would like to thank Gillingham Marina and Pirates Cave Chandleries and the British Dragon Association, who all gave prizes, Craft Insure, Emblem Workwear and Network Yacht Brokers all donated cash to help with the running of the event.

We also owe a thankyou to the army of staff and volunteers whose hard work made the event run as smoothly as it did, none more than former Commodore Mike Wallis who allowed us to use his latest boat as committee boat. At some starts his heart must have missed more than one beat!

This year’s social program was severely limited by the Covid Pandemic so there were no formal events as in past years but hopefully these will return next year when we will be fully open and can welcome more visitors. 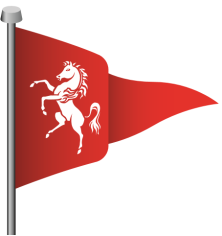