The London and South East Toppers joined Medway Yacht Club on Sunday 9th May for a Topper Open event as part of their Traveller series.

The gales and rain of the previous day had cleared away and the morning was bright and sunny as 19 visiting boats and one local boat arrived.

After a socially distanced briefing the Toppers left to follow the committee boat, Saxon, to Hoo Bay for the morning racing. The wind was a moderate southerly to south westerly breeze which made for difficult course setting between the shore and the moorings to set a decent beat on the triangular course.

The course was set and as the starting sequence began the wind gods were not favourable with a 45° shift meaning that the windward mark could be reached on a single tack.  With a minute to go to the start the AP flag was hoisted and the whole course had to be reset including moving the committee boat. 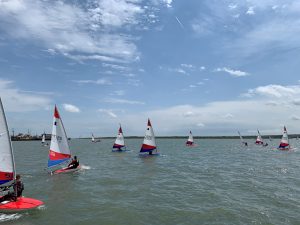 With this done the 2nd starting sequence commenced. This time, however, the sailors themselves were a little too eager and with nearly half the fleet over the line before the start, the start was recalled.

The race officer decided to give the Toppers one more chance before moving to the Uniform flag but unfortunately the sailors were too eager and there was another general recall.

Now with the fourth attempt at starting and Uniform flag in place the sailors were a bit more restrained and the race was started successfully.

The wind shifted again to make the beat quite one-sided but the sailors seemed to be revelling in near-perfect conditions and the race continued. After 3 laps the course was shortened and Edwin Cross won the race, setting a standard that was to last all day. Jadon Brockdorff-Kennedy took 2nd and Leo Yates in 3rd place.

With another wind shift the course was reset again and the second race was started.  The sailors enjoyed a much more even beat and with the wind increasing this race was also completed with 3 laps and was won by Edwin Cross.  Megan Thomson was 2nd and Samson Cross 3rd.

In the afternoon with a falling tide the course was set up-river near Upnor Castle so that the sailors could return easily at the end of the day. With not much time before the 4 o’clock cut-off for starts a simple windward leeward course was set up while the sailors were at lunch.

Unfortunately the start was delayed by a wayward outer distance mark which did not want to set in the tide but this gave the sailors the chance to get used to the strengthening ebb tide.

All the sailors had a tough time beating against the strong tide but favoured the right-hand side of the course where the tide seemed the weakest. The 4.2 rigged Toppers struggled especially but with great determination managed to complete a least one lap of the course.

It was a challenging race with three slow beats against the tide but the sailors showed great skill in making their Toppers go to windward and the race was ended after three laps in near perfect sailing conditions.  The racing was pushed as late as possible so that the sailors could make the most of the conditions with 15 to 20 kts of wind from the south west.  Edwin Cross completed the three wins to be unbeatable all day.  Joanna Leake was 2nd and Leo Yates 3rd. 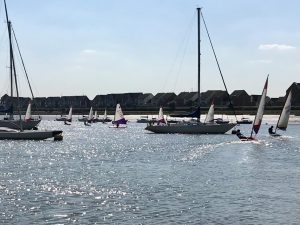 After a tiring day the sailors quickly returned to the shore with the tide.  Prizes were awarded to Edwin Cross, first overall with Megan Thomson 2nd, Leo Yates 3rd and Joanna Leake 4th.  Lucas Symons was first of the 4.2 sailors.