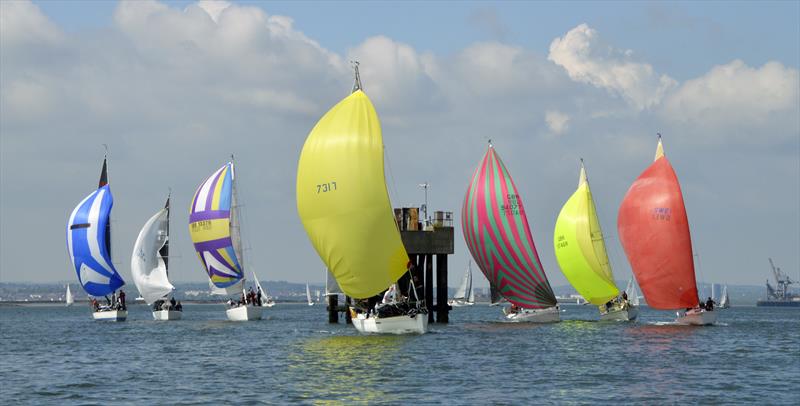 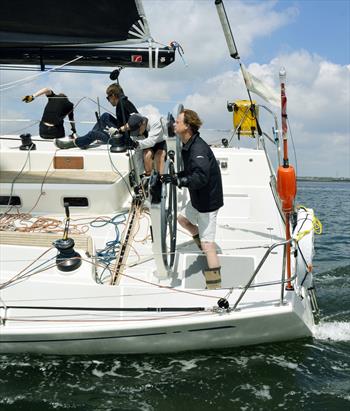 The Regatta Overall by Colin Weston

The move from July to the late May Bank Holiday seemed popular with 45 boats participating in the main Regatta and 11 Thames barges in the Medway Barge Match which meant that we had over 300 sailors on the water. It was very pleasing to welcome our visitors from Greenwich and Hollowshore who were rewarded with a best visitor prize this year.

Weather forecasts through the week proceeding the Regatta had the Race Officer and Committee concerned that Saturday would be a wipe out with at one time no wind forecast whatsoever. In the event the weather gods were very kind to us and we had good winds of varying strength and plenty of sunshine.

The cruisers divided into two fleets and enjoyed both long and shorter courses. On the Sunday (middle day) we introduced the Medway Challenge Race which encouraged a few extra participants who didn’t fancy – or couldn’t make – all three days; hopefully we can build this with more entries next year.

Shoreside activities included a curry after the practice race on Friday. On Saturday the tired competitors were greeted by shanty singers and a hog roast as they came ashore followed by MYC’s own DJs Jenny Best and David Boakes keeping them dancing until late. The Regatta Dinner was moved to Sunday and sold out with over 95 sitting down to an excellent meal. After dinner we auctioned special Whitstable Bay deckchairs provided by Shepherd Neame and raised a fantastic £510 in aid of cancer charities.

The prize-giving on Monday was well attended with a table full of silverware and glasses being handed out to tired but happy competitors;

27 cruisers joined other classes, in supporting this year’s regatta. The club split the fleet into two divisions, with Division 1 having 10 boats, which were dual scored under both IRC and NHC and a larger Class 3 division with 17 boats. The latter division illustrating this year’s successful format by the organising club to promote racing for the occasional racer and/or short-handed crew.

Class 3 sailed one race per day over the three day weekend, including this year’s new event for Race 2 which doubled up as the “Medway River Challenge Race”.

PRO Richard Stone and his team laid on near perfect courses that made the best of both the River Medway itself and our playground out in the Thames Estuary.

Clever courses, with multiple spinnaker sets and drops, gybes, tactical upwind legs, all combined to give ideal regatta sailing, generating broad smiles on competitor faces, as they came ashore for a nifty beer in the club house. Well down to all support staff who made the regatta a success, including Bar & Galley staff!

In Class 1 Robbie Stewart (Hellaby) used the regatta as a shakedown for the forthcoming Quarter Ton Cup on the Solent, managing to secure their third Regatta win in a row under both IRC and NHC rating systems. Second place was taken by Joe & Vanessa Bolton’s Ghost Train (Beneteau 33.7), with third place going to Xray (Beneteau 31.7) sailed by Andrew Baker.

Class 3 were delighted to have visiting boats from both Greenwich Sailing Club and Conyer Cruising Club, and for 2020 we will warmly welcome visitors from other clubs along the East Coast. Please get in touch with the club if you want to attend next year: www.medwayyachtclub.com

The fleet in this class varied from a Limbo 22 (Festina Lente), up to a Delher 36 (Valhalla), with many varied designs in between. An excellent turn out of 17 boats made for close racing, with the overall winner being Phillip Clarabut in Elieson (Feeling 32 DK), second place went to Fals Cupper (Nicholson 32) and third place to Paul Smith’s Westerly 33 Toytown. 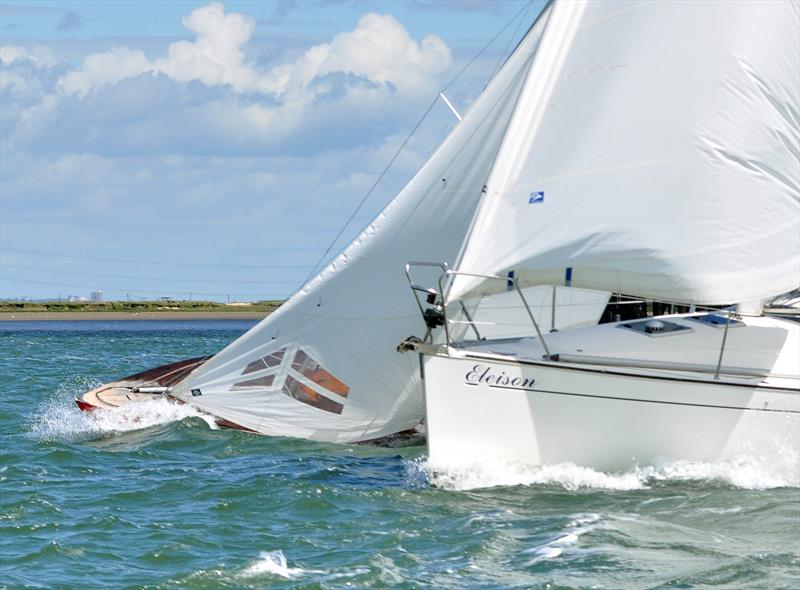 15 yachts set out on Saturday to compete for the class three 2019 regatta trophy under the NHC handicap system. The majority of the fleet were sailing under white sail. The first of the three races saw the fleet spread out relatively quickly under winds that were fickle at times with the odd gust up to 16 knots. The smaller boats showed their strength in these airs.

Race two, which also included the Challenge Trophy, saw the fleet go out in to the Estuary and some very close racing was to be seen. With gusts up to 24knots it was those boats that had reefed on the downwind leg just before the leeward mark in preparation for the long beat home that benefited. The larger boats paved the way but there were seconds between the leading yachts on corrected time.

With three points separating the leading four yachts it was all down to race three. The wind blowing from the West at around 12knots enabled the race committee to set an upriver start. The fleet were extremely close at the windward mark before the run down river. The race committee set a course that included all angles of sailing including three windward beats. Similar to race two the results on corrected time between the leading boats was a matter of seconds.

The regatta was a very well organised event with fantastic sailing and great courses. The event shows that all yachts of any shape and size can compete in the Medway Keelboat Regatta. 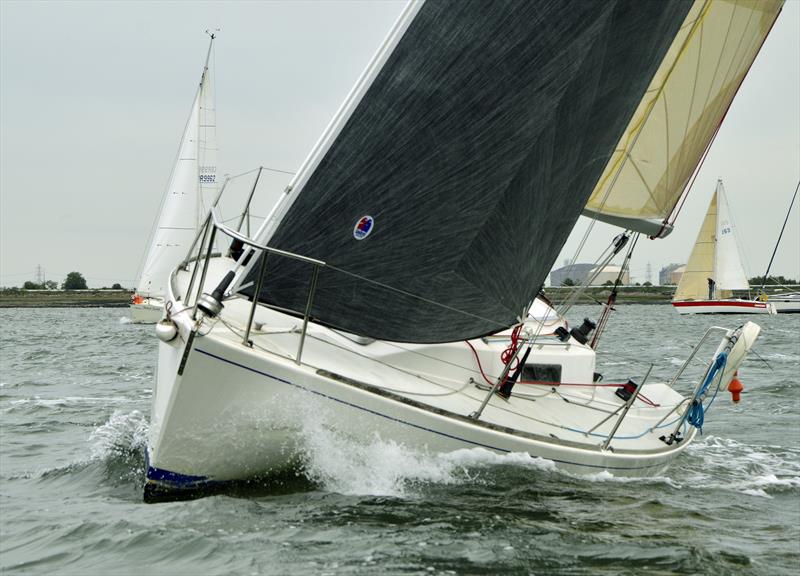 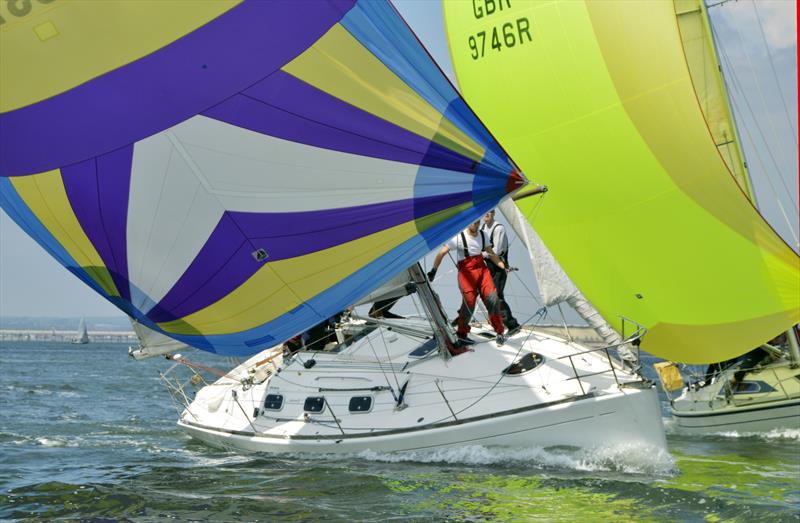