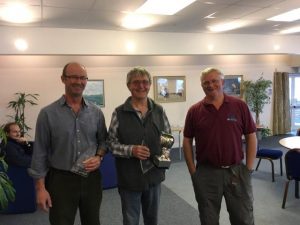 A good fleet of 19 boats met up at Datchet Water Sailing Club over the weekend of 7/8 April for the UK Wayfarer Inland Championship 2018, which was also the first event of the Craftinsure National Circuit and Travellers Series.

The wind on Saturday was 10-15 knots from the south which gave very close racing with places changing regularly throughout all the races. Wind gusts were sufficient to cause the occasional broach and a solitary capsize by one competitor.

In the first race of the day enthusiasm got the better of the fleet at the start which resulted in a general recall. The second start was clean. Michael McNamara/Simon Townsend led at the first mark followed by Guy Marks/Mel Titmuss and Tim/Jacqueline Townsend with the peleton close behind. An incident at the first mark saw Andrew and Tom Wilson doing turns. The race progressed for a couple of laps with places at the front unchanged, but at the second leeward mark the Townsends misjudged a spinnaker drop and lost several places. Meanwhile the Wilsons were charging through the fleet and eventually got the better of Marks/Titmuss. McNamara/Townsend, the Wilsons and Marks/Titmuss took the first three places with Nigel/Michael O’Donnell coming through to claim 4th.

The third and final race of the day also got away first time. Now it was the turn of Richard Stone/Catherine Gore to get away well and they led for a part of the race until swallowed up by McNamara/Townsend who went on to take their second win. The Wilsons and Marks/Titmuss resumed their battle eventually overtaking Stone/Gore to finish 2nd and 3rd respectively. Positions 4th-7th finished within a few seconds of each other, the nod going to Adam Wickenden/Stuart Hall.

On Saturday evening most of the fleet decamped to the Ostrich in Colnbrook, a 12th century Inn whose patrons, legend has it, had come to a sticky end in the past. Not on this occasion. A good time was had by all and we agreed to meet again on Sunday morning to see if we could improve our positions in the overall standings.

Alas, Sunday dawned with no wind overhead, little wind forecast and a mist which was turning to rain. The race officer abandoned the day’s racing and so the positions overnight stood for the Championship.

The winners of the Wayfarer Inland Championship for the twelfth time were Michael McNamara and Simon Townsend. Runners-up were Andrew and Tom Wilson. The podium was completed by Guy Marks and Mel Titmuss. Michael thanked the race officer, the organising club and home fleet for the event and their hospitality.

The next event in the Craftinsure National Circuit and Travellers Series is at West Oxfordshire Sailing Club on the 21/22 April. This is an open meeting and also the Wayfarer Junior Championship.