The Wayfarer Eastern Area Championship, which was also the fifth event in the Craftinsure National Circuit and Travellers Series 2017, was hosted by Medway Yacht Club over the weekend of 22/23 July. Twenty three boats, including one from Holland, competed in a six race series over the two days.

The wind on Saturday was 12-21knots from the south west, while on Sunday the wind was from the west, slightly lighter in the first two races of the day but increasing to 20 knots for the final race of the event. Windward/leeward courses were used for both days giving plenty of strategic and tactical options upwind and down especially on the ebb tide for the later races on both days.

As predicted, most of the teams at the head of the Travellers Series attended, with the fleet being reinforced by a strong local fleet. Andrew and Tom Wilson, Len Jones and Jamie Lea, and Bill and Lisa Whitney headed these but were expecting to be pushed hard by Guy Marks and Mel Titmus, Dave Roberts and Mike Bryant, Brian Lamb and Sam Pygall, and Richard Stone and Catherine Gore all of whom had performed well at the recent National Championships.

Race 1 started on time and immediately turned into the expected duel between the Wilsons and Jones/Lea, the latter getting the nod at the finish. The Whitneys finished third. Game on. 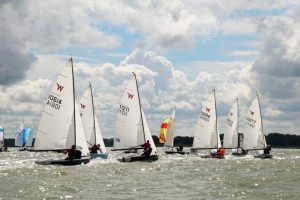 Race three was also won by the Wilsons, pushed hard this time by Jones/Lea and Marks/Titmus. By this time the wind had increased and a few boats capsized. The fleet was also slightly depleted because of two boats damaged by collisions between the races.

Overnight leaders were comfortably the Wilsons followed by Marks/Titmus, the Whitneys and Jones/Lea.

The fleet enjoyed its traditional sail back to the club via Hoo Creek, and free beer and cake in the marquee. The evening’s entertainment for competitors included a drinks reception, three course dinner and a riotous quiz compered by Mark Penny, the club’s Vice Commodore. Overnight the beer marquee became the boat repair shed to try and get damaged boats out on the water the following day.

On Sunday morning all boats were back on the water, but there was a slight delay to proceedings while the race committee allowed the wind to settle and laid a course. In probably the lightest wind of the weekend, race 4 was won by Jones/Lea followed by the Wilsons and the Whitneys. Behind them positions were changing constantly, shaking up the results a bit. This result opened up the possibility of a number of winners with two races to go.

Race 5 was won by the Wilsons. Runners up were Marks/Titmus while Jones/Lea finished third. This race effectively gave the event to the Wilsons because of their consistency over the two days with one race to go.

By the start of race 6, the wind had increased again and several competitors capsized as they pushed hard to get good results. Among the swimmers were Jones/Lea. Regular readers of Wayfarer race reports will be aware that Len Jones and his crew are very good at capsize recovery; they seem to get lots of practice. However, this particular inversion occurred at the last windward mark giving little time to recover, so this race became their discard. Meanwhile, at the front of the fleet the Wilsons sailed serenely on to pick up their fourth win of the weekend, this time followed by the Whitneys and the Townsends.

Overall winners and new Eastern Area Champions were Andrew and Tom Wilson. Len Jones and Jamie Lea were runners up and have made a bulk order for mast head wind indicators in time for the next event in the series. Bill and Lisa Whitney were very consistent over the weekend and finished third.

On behalf of the visitors, Andrew thanked everybody at the Medway Yacht Club for their hospitality, but especially the race team, for a wonderful weekend of sailing. Thanks also go to the event sponsors, Chesley Storage, Craftinsure, Pirates Cave and Shepherd Neame.

The next event in the Travellers Series is the Southern Championships, hosted by Datchet Water Sailing Club on 9/10 September.