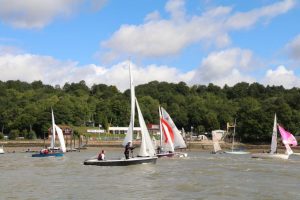 It was Marathon time again on Sunday on Sunday 30th July. The handicap dinghy race organised by the Medway Yacht Club where we all sail from the Upnor line down to buoy 16, turn right for the sail up Otterham Half Acre Creek, round Otterham Fairway Buoy, down to 13, turn right again for the long journey down Saltpan Reach until with some relief, you turn right at S Kent for Queenborough Spit and then the long sail home with a brief visit to Stangate Spit. Oh don’t forget buoys 12 and 16 on the way home either. The course is about 26 miles and for most of us, is about 3-4 hours long and the only consolation is that we sail down with the tide and ride back with it.

Sunday’s race was held in brisk conditions with a WSW breeze between 15-20 knots and there were worrying reminders of the 2014 race held in similar conditions along with a vicious thunder squall at the end when we were all rather tired. Whilst winds were similar this year, we were spared the squall. However, the whole race can be viewed as a touch of masochism for the crew. Why do we do it? 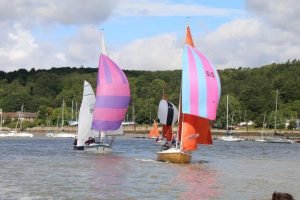 39 boats entered and the slowest boats were sent off first from 1000hr with the fast guys at 1040. There was a long run down to 16 with a few gybes to keep interest up followed by beat to OFB. The Bishop’s Ooze stretches well to the east of buoy 16 and there were a few of us who had to bear away when centreboards started to get sandpapered by the glutinous ooze below us. After rounding OFB, there was an exhilarating broad reach to 13 but by then, we Wayfarers were already caught by the fast guys in the Musto Skiffs whose speed downwind must have been exhilarating. Do they have airbags for the helmsman if they collide? The wind was a little lighter temporally for the run down Saltpan Reach and then the relief of ending the increasing distance from the MYC at S Kent but the girding of loins for the long upwind haul up river.

The wind piped up for the 9 boat Wayfarer fleet at least and it was a tough sail against the wind with the short reaches up and down Sandgate Creek for a little breather. In the Wayfarers, there was much place changing throughout the race within the fleet which added interest considerably and final positions were not really settled until Heartbreak Reach. Tony Alexander and Jon Moon had great boat speed up wind and came back from 300m astern to finally get first place in the fleet and we found ourselves battling with the cruiser Ynot (Owen family) for much of the upwind sailing. A few shark points by dinghies were gained after crash tacks had to be made and leaving mainsheets cleated in these conditions meant a swim was inevitable. The final beat up heartbreak reach is always a challenge particularly when tired, leaning out then in, sails flapping, nearly capsizing, you know what it is like, and then the line and â€¦.food and a drink. 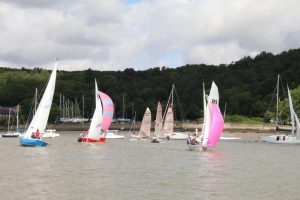 Andrew Peake narrowly won from Graeme Oliver and Richard Smith in the Musto Skiffs and Tim Kift/Jo Wicken sailed well to be fourth in the Alto followed by Tony Alexander/Jon Moon and Richard Stone/Phil Stacey in the Wayfarers. It was a great day of sailing and particular thanks go to the MYC Officers, particularly Catherine Gore, Tim Townsend and Mark Penny for organising the race with the armada of rescue boat crew. They were a considerable comfort when battling against some of the stronger puffs we had to endure in waters some distance from home.

I wonder what the legendary Wayfarer sailor Frank Dye would have thought about the race. He was the man who sailed form Iceland to Norway in a Wayfarer in the early 1960s. I think he would have thought that it would have been a stroll in the Park! I have my own opinion however. For most ordinary folk, the Marathon is an excellent race and a chance to see parts of the Medway in which we seldom visit. 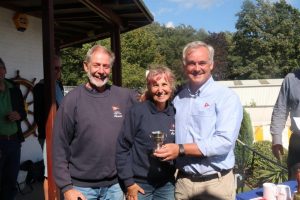 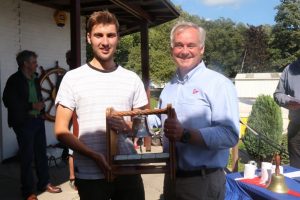 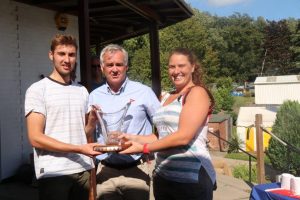