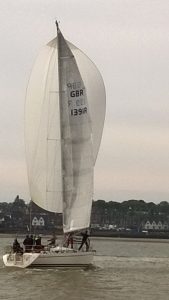 The first May Bank Holiday weekend saw the Cruiser Class Spring Series rewarded with a slightly softer than forecast 19 knots from the south east.

The PRO set a start line just off Gillingham Marina, which provided a first upwind leg to buoy 25, followed by a run back to buoy 30 before fighting the flood all the way down river. The lead Class 1 boats, Full Tilt (Arcona 400), L’Autre Femme (J/105) and Reefer x (X-99) were chased downriver on a mixture of upwind and fetching legs by The Works (Projection 762) and the two Dehler 34s, Zephyros and Valkyrie.

At buoy 13 the fleet had to press on upwind to Stangate and Blackstakes, with most boats choosing to tack over to the southerly shore. Reefer x (X-99) as ever tried to be different by pressing onto the Northern side, before tacking back across to Stangate, crossing tacks with L’autre Femme. The J/105 remained in control however, despite the best efforts of the X-99.

Ross Eldred and his Full Tilt were first to the top mark and set their spinnaker in a tidy manner to extend their lead over the chasing pack. L’autre Femme and Reefer x rounded next to provide chase, with the X-99 moving up to 2nd place.

The rest of the race was a combination of reaching and running legs back to buoy 20, before a further upwind leg back downriver to buoy 16, before spinnakers were hoisted once again to take the boats up river to buoy 30. The final leg being a beat against incoming tide back to a finish at buoy 27.

Special mentions should be made for the crew of GK24 Suntrek who were the sole entrant in class 2, our committee boat Fleet and crew for setting an enjoyable course as per usual, and our excellent sponsors Pirate’s Cave.

The next race is on Sunday 7th May when a number of class 1 and 2 boats are expected to return after the bank holiday weekend. Word is that Robbie Stewart is returning to do battle in his quarter tonner Hellaby for the last three Spring Series races. Good to see the racing season finally underway. 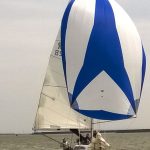 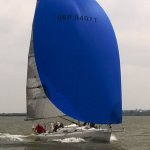 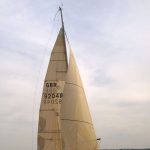 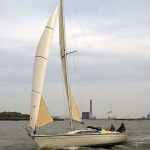