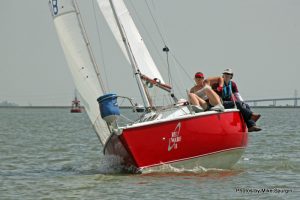 A dark, cloudy evening, with grey skies, drizzle, little or no wind and a strong ebbing tide did not dampen the spirits of the 10 boats, skipper s and crew who turned out for the 1st race of the series.

A special short course was set which took the fleet down into Gillingham reach where more breeze was forecast.  The race was postponed for 5 minutes to allow the Dragons to be towed to the correct side of the line. The wind was NW 0-2 and basically a downwind drift with boats finding it difficult to fill their spinnakers and / or to find clear air.  Zephyrus made the best start on the southern shore and led the fleet down river to the 1st mark followed by Valkyrie and Mr Chips and Gandalf.  At the leeward mark at buoy 29 Valkyrie kept the boat well above the mark until, the last minute and manged to sail over Zephyrus into the lead. Competitors tried different sides of the river to try and find some breeze to the windward mark at buoy 30 and in some cases better ground to windward was made out into the tide but in more breeze.  Several place changes occurred in the fickle breeze with some boats drifting downriver after finding holes in the wind which tested the concentration and temperament of the skippers.

Red Dwarf II decided on an early bath, but the breeze filled in slightly and the remaining competitors were able to finish the shortened course well within the time limit.

Valkyrie took line honours and was 1st on handicap in the cruiser division with Mr Chips and Zephyrus tying for 2nd place. Gandalf was the only keelboat to finish in the keelboat division.

Full results can be seen on the MYC website

Have boat no crew or can crew  no boat just turn up, we will get you on the water !