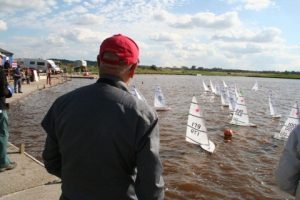 The Winter Programme marches on with all sorts of weather being throw at us.

High winds during most of the events, heavy rain for one Sunday (we still stood out there and carried on) and Round 5 on the 17th January in virtual flat calm. Even last Sunday 24th it looked like we would be both wet and blown away.

Overall lead after 6 Rounds is with Jamie Blair but Tony Owens is only a few points behind. Richard Stone, Jon Moon and Peter Freeman are also in the chase and with the remaining 8 Rounds before Easter there is still plenty of time for a change in the running order.

A testing day with only a light breeze to make the boats move. Much the same as the high winds it was difficult for the helm to make the boats do what they wanted. With only five races sailed there were no discards so all races to count.

It was really great to have Adrian from Royal Temple YC with us showing us all how to do it, taking the bullet in 4 out of the 5 races. It clearly shows that his selection for the GBR Team to go to the European Championships is a good call. Jamie will be a member of the Team venturing to Valenciennes (80 miles east of Calais) for the weekend of 13-16th May.  All the European countries have an entry plus a number of wildcards from USA, Canada, South Africa and Australia.

We have a new member Charles Pegram (another MYC member) who launched his new boat today and showed great pace with a second in Race 3. Brian Lev’y clocked up a 4th showing he can do it too. Richard takes the prize for the largest piece of proper seaweed. None of the usual grass strands for Richard.

The wind was kind to us and all of the helms decided on the “B” rig. Most persevered with the B rig and most we overpowered and certainly after the coffee break a change to the smaller “C” rig should have been the decision. Jon Moon showed us that the C rig did pay and wished he had changed before the last race.

Some great results in various races: from Brian (2nd), Andrew (3rd), Les (6th), Scot (6th), Charles (a very steep learning curve 5th). Usual front runners being upset occasionally except for Tony who scorched an overall win for the day with 9 first places out of the 14 races. Well done