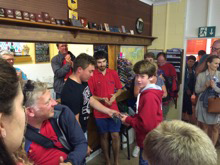 Wilsonian Sailing Club hosted its Junior Regatta on Saturday 29th August. This takes place at the end of the WSC cadet training week, and this year 25 boats took part. The regatta was open to MYC cadets and Henry Townsend made the short sail downriver to WSC first thing on Saturday morning in his Topper to register his entry, read the Sailing Instructions and attend the competitors’ briefing. The weather forecast was not encouraging with light winds in the morning, becoming even lighter and with heavy rain forecast for the afternoon. In the event, the rain largely held off until after the racing had finished, but the winds were light and the Race Officer set triangular courses in Hoo Bay in the morning, venturing across the river to 30A in the

afternoon. The race team did well to complete all four scheduled races. Henry sailed well in conditions which suited him, winning all four races in the medium handicap fleet (Toppers, Teras and a Feva) and collected the first place prize from the WSC Cadet Fleet Captain.