This years MYC Open Regatta was a great success with forty nine boats and 200 plus competitors enjoying competitive racing in glorious conditions over four days. Reports for participating classes follow:

Photographs by Richard Janulewicz of Sharkbait 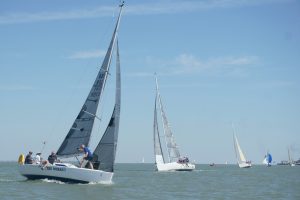 29 Cruisers entered this year’s Medway Yacht Club Regatta. An interesting selection of boats with everything from one designs such as J-80’s to a classic Sparkman and Stevens Swan 38 took part in 3 days of incredibly close racing. Friday included two races of approximately 15 miles each, completed in perfect ‘shorts and T-shirt’ weather. The brilliant sunshine, blue water and 12-15 knots of steady breeze ensured this was a day on the water not to be missed!  A fine dining evening was waiting ashore in the clubhouse for owners and crew with access to a shirt and clean pair of shorts. The breeze filled in to a steady SW F4-5 on Saturday after a light start, allowing a distance race of just under 30 miles out into the Thames Estuary. The ferocious tides in Sea Reach caught some of the fleet out, those staying on the Grain shore gained greatly over those deciding to tack over to the Southend shore. The sun continued to shine and some of the less serious racing classes were spotted sun bathing, drinking ‘refreshments’ and BBQ’ing as they completed the course. The evening’s entertainment ashore was a slightly more casual affair with a choice of Paella and an acoustic guitarist playing on the terrace overlooking the river. Perfect! Sunday saw the return of our typical summer weather with an overcast start but in return for the lack of sun, a SW F6 in the forecast. A gusty start with 15- 20 knots of breeze and a forecast for more, had some boats reefing early and others deciding to hang on play their mainsails and travellers instead. A shorter race of around 15 miles including plenty of spinnaker opportunities for those willing to try their luck in the breeze. Some closely fought tacking battles were seen on the beat to get back to the club, even against the ebb the stiff conditions saw the fleet back by early afternoon. A BBQ ashore and prize giving rounded off an excellent long weekend of sailing on the Medway. Many thanks to the organisers, safety boat crews, the committee boat and her crew and of course to the competitors who helped make the 2015 Regatta a success. The Dragon Fleet were treated to three first class days of racing, not only great wind conditions and weather for the first two days with a lot of sunshine also in the mix. Day one took the fleet on a thirty mile long distance race down to Sea Reach 2 in the Thames Channel, After mastering a few navigational issues the leading boats all went to the back of the fleet to start racing all over again after the first 15 miles! (they love a challenge!!) and then punching 3+ knots of tide to get up to Sea Reach 4 gave them a real taste of those heavy estuary tides. A beat round the edges of Grain Spit was also a very new experience but common sense ruled and none of the fleet went aground ( unlike some of our other one design keelboats!). Ten miles later they were back on the line and looking forward to a well deserved trip to the bar. Day two provided 4 windward / leeward races of exceptional quality and was thoroughly enjoyed by all. Day three a short race in blustery conditions was challenging and resulted in some relatively tired sailors who returned to the Club for the prize giving. Our sincere thanks to Richard Stone and his team for giving us an excellent event and one to remember. 10 local Sonata’s competed within this year’s Medway Keel Boat Regatta under the ‘One Design’ Category; a total of 6 races over 3days between Friday 10th and Sunday 12th July. Day 1 of the Regatta saw 8 out of the 10 Sonata entries on the water for the long distance race in a reasonable SSW breeze. The course set sent us down the Medway, past ‘Blackstakes’ and out into the Thames Estuary. At the start most boats opted for a port tack from the pin end, this being slightly biased following a small wind shift. Spring Sonata managed to maintain a good line and speed to the windward mark and rounded 1st followed by Silver Lining in 2nd and Munchkin in 3rd place. Blue Tack, Miss Fortune, Red Dwarf II, Ram and Cry Havoc rounded closely behind keeping the pressure on the lead boats. The Colourful spinnakers were quickly hoisted for the downwind run out of Gillingham Reach and into Long Reach where the 3 lead boats held onto their spinnakers for as long as possible through several gusts and gained some distance heading for Blackstakes. After passing ‘Blackstakes’ to port we headed out into the Thames Estuary. ‘Sea Reach 2’ and ‘Sea Reach 4’ buoys, which took a bit of locating and several checks on the charts, were taken to port with a beat back into the Medway, heading back to ‘Blackstakes’. It was noted that several boats pushed the boundaries and briefly grounded on the way back into the Medway. Once clear of Thames Port a few boats tactically launched their spinnaker and managed to hold it for a tight reach onto MYC1 and the committee boat finish line. After 4¾ of racing, Spring Sonata who managed to dominate the race crossed the finish line first, closely followed by Silver Lining in second and Munchkin in third place. There was some after race ‘Fine Dining’ back at the club house which closed out a good days sailing for the Friday. Day 2 of the Regatta saw beautiful sunny day with all 10 boats on the water for 4 windward leeward races setup perfectly in Long Reach by the Race Committee. Wind and sea state were good with a SW F3-4 over an ebbing tide. Windward / Leeward race starts are always exciting with boats looking to gain that early position and tactical advantage without infringing the start line or other boats rights. The first of 4 races saw a good beat to the windward mark with several boats tacking early onto port and heading for less tide in shallower water, but with less wind due to the power station pier. Other boats maintained a starboard tack for longer, heading for more wind but at the expense of a heavier tide. The Starboard tack seemed to pay off albeit boats arrived at the windward mark on port tack. The start of races 2 and 3 went well although race 4 saw a general recall through everyone’s enthusiasm to get started. There was also a boat disqualification from this race for an OCS.   Spring Sonata, Red Dwarf II and Silver Lining managed to dominate the windward leeward event with Red Dwarf II taking two 1st places, a joint 1st and a 2nd place. Spring Sonata managed a 1st place and two 3rd place positions while Silver Lining managed a joint 1st place, a 2nd place and two 3rd places. Further entertainment was organised back at the clubhouse with piella, sangria and Spanish theme music throughout the evening. Day 3 of the Regatta was racing ‘around the cans’. The weather was overcast with a strong SW breeze F4-F5 and a 20% risk of rain. 9 of the 10 entries ventured out in these tough conditions for the final day. The 3 leading boats at this point, Red dwarf II, Spring Sonata and Silver Lining were significantly ahead of the rest of the fleet in terms of points and were out competing for an overall Regatta win. The wind strength increased slightly just before the start. A cautious approach was taken by Red Dwarf II who set off with a smaller No.2 headsail as did Munchkin & Cry Havoc. The 7 other Sonata’s all kept their No.1 genoa’s sailing these at the top end of the designed wind range. It’s always good to hold onto the No.1 sail as long as possible as boat pointing is not as good with the Nr.2 sail. The course set sent us out to buoy 13, back towards buoy 15 and then out again to buoy 14 before beating back to the finish line at buoy 29. There was some short tacking into the shore required on the way back to keep out of the ebbing tide. Red Dwarf II changed their headsail back to a Nr.1 after rounding the first windward mark and this later paid off with some good upwind speed; holding off Silver Lining and Spring Sonata on the beat back to the finish line for 1st place. Silver lining finished 2nd and Spring Sonata finish in 3rd place. Miss Fortune had a good race and managed to stay with the leaders until their main halyard broke causing them to retire. Munchkin and Cry Havoc had a close race back having kept their Nr.2 sails up. It was nearly too close to call over the finish line with Cry Havoc taking 6th place by an anchor block. Presentations and prizes followed back at the club house with Red Dwarf clearly dominating the Saturday and Sunday racing and managing a 1st position in all but 2 of 5 races. Spring Sonata was 2nd overall with Silver Lining only ½ point behind in 3rd place overall. Next year MYC are planning to hold the Eastern Championship Event over the same Regatta weekend. Five Squibs competed in two races. Day one was a longish race not quite venturing out into the estuary saw the Halliday-Sadlers in Avocet taking the days prize a position. Opting for another round the cans race rather than windward leewards Avocet confirmed their position with another win on day two.  With less favourable conditions forcast for day three the fleet opted not to race.